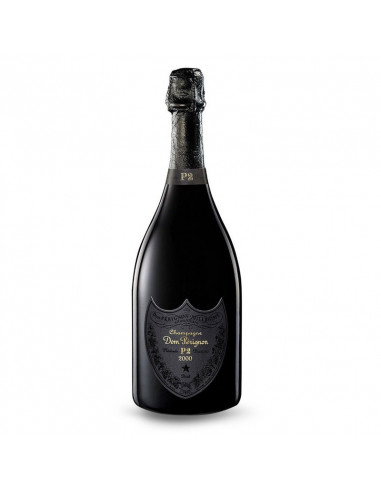 Plénitude 2 expresses the second life of Dom Pérignon, patiently and wisely elevated to new heights of excellence and projected towards eternity. After almost fifteen years of slow transformation in the cellars, the energy of Dom Pérignon expands and reaches the apex of an essential and radiant vitality in its state of Plénitude. Raised to new heights, it manifests itself in all its facets, becoming wider, longer, deeper, more intense and embellished with further longevity.

The year was characterized by the alternation of cold and rainy days and hot days with violent thunderstorms. The summer was uncertain and often gloomy, but the weather miraculously returned towards the end of August. It is thanks to this favorable period - which continued without interruption until the end of the harvest - that the Millesimato was born. Presented in 2008, Dom Pérignon Vintage 2000, an ideal combination of freshness and maturity, effervescence and harmony, is expressed today through new suggestions. This Deuxième Plenitude, P2 2000, releases new energy, intensity, vitality and depth

NOSE: The bouquet is ripe, tonic and generous. The warm notes of hay and brioche mix with the hints of bergamot and stone fruit in warm golden colors; smoky gray accents flutter over the whole.

ON THE PALATE: The attack is vibrant and imposes itself directly, a prelude to a richness that is more tactile than fleshy, which is revealed only gradually. Refined, the viscosity is contained and blends harmoniously with the contours of the wine. The persistence is exquisitely bitter and juicy, with nuances of licorice and toasted malt.

CULINARY COMBINATIONS: Consistency is the fundamental characteristic of P2 2000. How to reveal it by bringing out the best of this wine? Through bold combinations, such as a concentrated beef broth or whelk ravioli with parsley. Surprisingly, the essence is revealed through small details in rich and complete dishes: fried artichokes, sea bass, peach and kombu salad, potato slices, milk foam and caviar. Slowly, the menu takes shape and comes alive around the sensations evoked by the Dom Pérignon P2 2000.

"The energy of the Deuxième Plenitude enhances only the most extraordinary characteristics of this champagne. Dom Pérignon P2 2000 is another bold step towards an obvious but at the same time elusive consistency." (RICHARD GEOFFROY FORMER CHEF DE CAVE DOM PÉRIGNON)